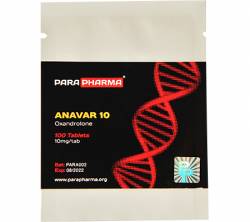 ANAVAR is an oral steroid, and has been alpha-alkylated to survive oral ingestion for the first pass through the liver, it’s still relatively mild in that respect. The unique chemical configuration of ANAVAR has a resistance to liver metabolism as well as noticable anabolic activity. Anavar appears not to exhibit the serious hepatotoxic effects.

ANAVAR is used to get lean and hard. Anavar is great for strength and cutting purposes, but not for bulking or a lot of weight gain. Everything you gain on ANAVAR  will be solid. ANAVAR 50 is exactly the same as Anavar 10, but stronger making the, usually higher, daily dosages easier to administer. ANAVAR is not suitable for women.

ANAVAR exhibits fat loss properties, as a fat-burning compound. Abdominal and visceral fat were both reduced in one study when subjects used Anavar. In another study, all over body fat and waistline fat were all reduced with a relatively small dose of 20 mg/day and no exercise.

In addition, weight gained with ANAVAR may be nearly permanent too. It will not put on a great deal, but youll stand a good chance of keeping most of it as good lean gain. In one study, subjects maintained their weight gains from Anavar for at least 6 months after they stopped using it.

In a nutshell, what you gain in terms of lean muscle and lose in terms of body fat tend to be fairly permanent when using ANAVAR.

Evidence also suggests that many of the effects of Anavar are not age dependant. If you are following the typical "time on = time off" protocol, this means you can lose a bunch of fat during your time on, then keep most (if not all) of it off until your next cycle. That makes it a great drug for athletes who are drug tested and need to be clean for their season, yet need to keep the fat/weight they lost on their cycle off. Anavar is also the clear choice for a "spring-cutting" cycle, to look great at the beach and you can use it up until the summer starts, and then keep the fat off during the entire summer. Water retention is virtually nil with it.