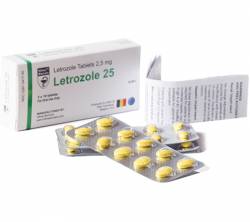 Letrozole is an extremely potent anti-estrogen which contains 2.5 mg of the substance Letrozole.

Letrozole was originally developed to help treat breast cancer in women. It can also have benefits to bodybuilders who are very sensitive to estrogen related side effects, or who are in heavy bulking cycles and taking large amounts of aromatizing hormones such as testosterone. Letrozole is extremely potent at blocking estrogen in the body, and studies typically show that a relatively low dose of Letrozole can eliminate up to 98% of the estrogen in the body. Some subjects have even been shown to have no estrogen at all in their bodies after being administered Letrozole.

While too much estrogen can be harmful and bring about unwanted side effects, it's important that bodybuilders don't totally eliminate estrogen all together, for its presence is vital for optimum muscle growth and also for keeping a healthy sex drive.

Letrozole is about 3 times stronger than Anastrozole, and would generally be used by those who have found that Anastrozole wasn't strong enough to keep estrogenic related side effects under control.

Another use for Letrozole might come to those who have already suffered from the estrogen related side effect, gyno. This is due to the fact that Letrozole has actually been shown to reverse the effects of this condition in some. There is no guarantee however, but if you have already begun seeing the symptoms of gyno, then it is probably worth giving Letrozole a shot and seeing if it can help.

Letrozole could also be useful to those bodybuilders who are in contest prep and looking to be as dry as possible. Those using Letrozole will typically take 2.5-5.0 mg a day. Anything more than this will generally reduce estrogen too much in the body and hinder one's sex drive.