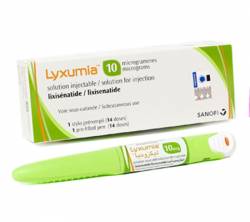 Lyxumia is used for people with type 2 diabetes whose blood sugar is not controlled by antidiabetic medicines taken by mouth, such as metformin, a sulphonylurea (eg gliclazide), or a glitazone (eg pioglitazone), and/or a long-acting insulin. Lyxumia is added to treatment with the medicine already being used. Lyxumia contain the active ingredient Lixisenatide, which is a type of medicine called an incretin mimetic. It is used to help control blood sugar in people with type 2 or non-insulin dependent diabetes.

Lixisenatide works by mimicking the actions of a hormone called glucagon-like peptide-1, or GLP-1. This hormone is normally produced naturally by the body in response to food intake.

GLP-1 has four main actions that help to control blood glucose. Firstly, it stimulates the pancreas to produce insulin in response to increasing levels of glucose in the blood. (Insulin is the main hormone responsible for controlling sugar levels in the blood. It causes cells in the body to remove sugar from the blood.) GLP-1 also reduces the production of glucagon. (Glucagon is a hormone that normally increases glucose production by the liver.)

GLP-1 also reduces the rate at which food passes from the stomach into the intestines, which slows down the absorption of glucose from the gut into the bloodstream. Finally, it acts on the brain to cause a feeling of fullness that reduces further food intake. By mimicking these actions of GLP-1, lixisenatide helps to control blood sugar levels in people with type 2 diabetes.

Lyxumia is injected once daily subcutaneously (under the skin) in areas including the upper arm, abdomen or thigh. It should be injected in the hour before the first or last meal of the dayIt comes in a solution that is usually prescribed at a starting dose of 10 micrograms once a day. This is then increased to 20 micrograms once a day after 14 days.

You should not take two injections on the same day. If you forget your normal injection, take it in the hour before your next meal.