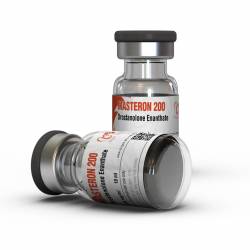 Masteron 200 is an injectable steroid made by Dragon Pharma, it's active substance is Drostanolone Enanthate.

Masteron 200 is perhaps one of the more exotic androgenic / anabolic steroids that may be used by an athlete. Originally it was developed and used as an anti-estrogen for the treatment of breast cancer. It was largely used in combination with the SERM (Selective Estrogen Receptor Modulator) Tamoxifen (Nolvadex) for the treatment of breast cancer, and did give a significant decrease in estrogen levels in women undergoing such treatment. It is not much used these days for such purposes, for varying reasons, however for many athletes including competitive bodybuilders in particular, Masteron remains a rather unsung favourite of anabolic steroid medicines.

The fact that Masteron 200 was being used as an anti-estrogen goes to suggest quite a lot about some properties Masteron 200 possesses. Masteron 200 is a derivative of DHT (dihydrotestosterone) and does not convert to estrogen through means of aromatisation. It is thought that the anti-estrogenic properties of Masteron 200 may be in part to do with either an inhibition in some way of the aromatase enzyme or an interaction with estrogen itself in a way which blocks receptor binding of the estrogen. Either way, this would put Masteron 200 as a useful tool for the anabolic steroid user who uses compounds that convert to estrogen (which most anabolic steroid users do, considering testosterone is the main basis of most cycles).

By inhibiting the aromatase enzyme, Masteron 200 would be in effect blocking the conversion of free testosterone to estrogen by the aromatisation pathway. This would not only serve to marginally increase the amounts of active free testosterone in circulation, but it would also negate the side-effects that result from high levels of estrogen due to aromatisation. Such side effects include the development of gynecomastia and water retention/bloating. Conversely, if Masteron 200 actually blocks the binding of estrogen to the estrogen receptor (ER) in some way, although aromatisation of testosterone may occur, its effects would be limited due to the inability of the estrogen to bind to the estrogen receptor. Thus through this mechanism, the effects of excess estrogen production through aromatisation would also be limited by use of this steroid.

Although Masteron 200 contains such anti-estrogenic properties, it also (being a DHT derivative) has anabolic and androgenic properties. Although in theory and on paper it may be seen to be not a very strong androgen, in fact Masteron 200 does give higher androgenic effects than one may expect. The use of Masteron 200, will shut down natural testosterone production and so despite having anti-estrogenic effects again, one must not think that Masteron 200 could be used as an option in post cycle therapy as it will inhibit recovery.

There are two forms of Masteron that are generally available for use – Drostanolone Propionate and Drostanolone Enanthate. The propionate version is usually dosed at 50-150mg/ml and is the fast acting version of Masteron, needing to be injected every other day. The enanthate version of Masteron is dosed normally at around 200mg/ml and needs only to be injected twice per week as the ester attached to the drostanolone is longer thus giving a slower release of hormone.