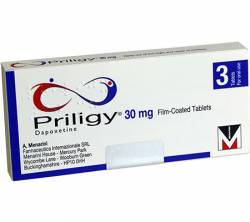 Priligy is the pill form medication designed purposely to treat premature ejaculation (PE) in men. Premature ejaculation, being defined as ejaculating quicker than their partner or themselves would desire. Technically Priligy is what is known as a SSRI (selective serotonin reuptake inhibitor). SSRI's are typically  prescribed for patients that experience depression and as such are used as antidepressants.

However some SSRI's have shown the ability to reduce ejaculation time in some men but no other SSRI in studies has worked as well as Priligy for this issue. Apparently it is also safer and eliminated from the body quicker than typical SSRI's as its terminal half life is approximately 20 hours with its initial half life around 1.4 hours. This is partially why it was rejected as a depression treatment. Because of its short duration a patient would need to be taking this medication several times per day for a proper effect, which is fairly unrealistic and as such Priligy has not been actually approved as an antidepressant.

Side effects can be, but not limited to, nausea, dizziness, diarrhea, headache, tiredness. But these are not necessarily what you will experience, some experience all, some or none and to different degrees, but mostly mild to moderate. Always consult your doctor or pharmacist if others appear or if you have any questions what so ever.