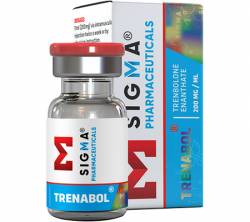 Trenabol is an injectable steroid which contains 200 mg per ML of the hormone Trenbolone Enanthate.

Trenabol is an injectable form of the strong anabolic hormone Trenbolone. Given the use of an Enathate ester, Trenbolone will exhibit a pretty much identical release pattern to testosterone enathate, providing a peak release a few days after injection, and then declining levels for roughly two weeks after.

Trenabol is one of the strongest steroids available today. It is roughly three times more anabolic than testosterone and a very potent androgen as well. Users of Trenabol often report incredible gains in strength and solid muscle mass. Trenbolone doesn’t convert to estrogen, therefore the gains seen off of this steroid are lean, quality muscle mass. The high amounts of androgen also work to bring about a defined “ripped” look to the user’s muscles.

Trenbolone is a versatile steroid and can be incorporated well into both bulking and cutting cycles. Users looking to bulk may choose to stack Trenabol with other steroids such as testosterone and an oral such as Dianabol. Users looking to run a cutting cycle will often look to stack Trenbolone Enanthate with other steroids such as Winstrol and Masteron. It is important to note that Trenbolone Enanthate will shut down the body’s natural testosterone production very quickly, thus making a post cycle therapy protocol essential upon the discontinuance of the drug.

Users often choose to run testosterone for a couple of weeks after the Trenabol in order to clear the receptors of the compound and make recovery a little easier to accomplish.

Trenabol can produce all common androgenic side effects such as oily skin, acne, increased growth of facial and body hair. It's also important to note that many users report uncontrollable night sweats while using Trenabol. To help combat this problem, it's recommended that users try to keep blood levels and stable as possible, and stay in a reasonable dosage range.

Trenabol is most often injected twice per week to maintain steady blood levels. Users often follow a Sunday-Wednesday or Monday-Thursday injection schedule. The most common dosage ranges are 300-800 mg per week depending on experiences and cycle goals.