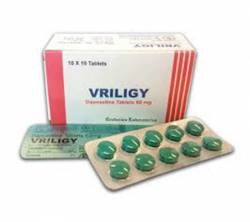 The basic component of Vriligy is Dapoxetine, a selective serotonin reuptake inhibitor (SSRI) that is specifically used to treat and prevent premature ejaculation in men.

Vriligy is used to treat premature ejaculation, which is one of the most common causes of sexual dysfunction in men. It is defined as early ejaculation with minimal sexual stimulation before or soon after penetration, and can cause distress and problems with relationships. Vriligy is used to improve control over ejaculation and increase the time interval before ejaculation occurs during intercourse, for men with persistent or recurrent PE.

Vriligy, a selective serotonin reuptake inhibitor (SSRI) that is used specifically for premature ejaculation (PE), as it has a rapid onset of action, with maximum effect within 1-2 hours and a short half-life, which means that it is rapidly eliminated from the body within 24 hours. Ejaculation is a reflex that is mediated by the sympathetic nervous system. When sexual stimulation has reached a certain threshold, sensory nerve cells in the spinal cord are activated and nerve impulses are sent to the brain, which then send messages back to motor neurones controlling the muscles in the penis that contract to effect ejaculation. The ejaculation reflex is thought to be mediated by serotonin, a specific brain chemical or neurotransmitter that is involved is transmitting nerve signals, which enables brain cells to communicate. Low levels of serotonin in certain areas of the brain are thought to be responsible for causing premature ejaculation.

Dapoxetine in Vriligy blocks the reuptake of serotonin from the synapse, which is the gap between nerve cells across which chemical messages are sent from one nerve cell to another. If the re-uptake of serotonin by the first nerve cell (pre-synaptic) is blocked, this means that there is more serotonin remaining for the receiving nerve cell (post-synaptic), which allows nerve cells to communicate with each other for longer. This action of Dapoxetine in Vriligy helps prolong the ability to maintain sexual activity without premature ejaculation and maintain control over ejaculation for longer.